What you must see in Prague in one day – from sunrise to sunset. 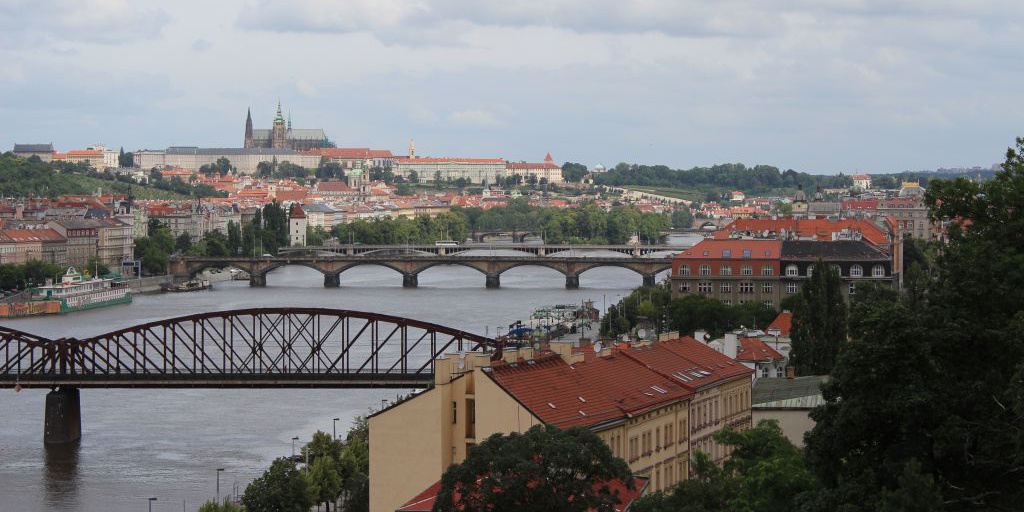 I love this city – so amazing – so romantic. Sooo cheap! It depends where you live of course. If you haven’t been there yet, you should definitely go. There are plenty of places you can visit and things you can do.

If you don’t want to be like most tourists, who chaotically run around Prague in order to see only three or four icons which really must be seen in this picturesque city, you will want to go to places that you will probably not find in any guide.

If you really want to see most of Prague in one or a little more days, I recommend this for your journey. When the sun has soared above the horizon and lights up the 100 towers of Prague in its morning rays (you can count them if you want), you should be ready at Vyšehrad station  underground line C.

You can see both sides of Prague from this one point, including Žižkov tower on the east side and the old city on the west side. There is the Kongresové centrum (Congress Centre) which is quite an interesting modern building constructed in the communist age that hosted the International Monetary Fund event (IMF) in 2000, and has many exhibitions and music events. Go along to Vyšehrad Park. Vyšehrad is a historical settlement and fort on a rock above the right-hand bank of the Vltava River. Feel the calm atmosphere. This historic park offers a pleasant environment, with statues, St. Peter and Paul’s Basilica, and amazing views of the river and Prague Castle.

If you are more curious, and if they are open, you can visit the dungeons. Keep going alongside the Basilica to the burial grounds. Maybe this doesn’t sound so interesting, but the point is, there are many famous and historical Czech people resting in peace here, and it is an impressive architectural place in some ways. From the graveyard, you can take the stairs down to the river. Probably you will want to take some pictures here. The views of Prague Castle will greatly impress you.

Go along the river embankment in the direction of Prague Castle. You can see old architecture as well as the most controversial building for Czech people.

The Dancing house (tančící dům) is a very modern building designed by Vlado Milunić and Frank Owen Gehry. Keep going to The National Theater. This building was constructed in 1881, but one month after opening, the theater caught fire, which was seen as a national catastrophe; thankfully the destroyed parts of the building have been rebuilt. Keep going to Karlovy lázně.

This is a disco club, so if you are young you can have a fun time there during the night. It is a very famous club, but what is more important, is that it is in the centre of the city, and again there are amazing views of Prague Castle. Everybody takes a picture here, and you will too, you will love it here, believe me. Now you can take a break, have some food in a cafe or restaurant on the embankment and find yourself in the 14th and 15th century, when St. Vitus Cathedral and Charles Bridge were built.

Meanwhile, you will be drinking your cappuccino or mojito, pigeons and seagulls will be circling above, and the Vltava River will fizz its melody in its tempo, which inspired Bedrich Smetana in his musical work of art. Do you know it? No? So, take a  listen (Give it a minute to start)

If you have relaxed enough, it’s time to keep going on your journey, this is not the end! Behind the disco club, when you walk by a passage with many souvenirs for sale, you will find yourself in the most famous place of all, Charles Bridge (Karlův most). Here you will feel the atmosphere of the 15th century – packed with musicians, painters, statues – and a lot of tourists. Take some pictures, listen to the musicians, look at the artworks, then cross the bridge to the opposite bank of the river.

When you come to the end of the bridge, continue up the hill in the direction of Prague Castle, here the work of the Czech master builders will absorb you. If you get lost, don‘t worry, just ask someone or use google maps. When you reach the castle you may want to see the guards parade, or changing of the guards.

Three castle courtyards give you a lot to explore and discover. St. Vitus Cathedral is on one side of the castle, so don’t forget to visit it. Apart from the view of Prague city from the castle, you can visit a few galleries as well as five castle gardens. Next, pass the castle to the other side and go down the stairs to the river.

Don’t use the bridge or tram as many people do. If you go down to the tram and underground station below the castle, you will get a chance see and visit much more – Golden Street/Zlatá ulička, the Toy Museum and so forth. When you reach the foot of the hill, I recommend that you choose one of the tram lines to Staroměstká, it is only one stop, or you can walk for about 5 to 10 minutes across the bridge.

Behind the bridge is the Rudolfinum, a concert hall built specially for the philharmonic orchestra and other music events. Pass the crossroads to Kaprova Street and after a few meters, turn right into Valentinska Street, you will find yourself in front of the National Library, New town Hall and Klementinum; the most beautiful library in the world, wrote boredpanda.com; it was founded in 1556.

You are now only a few steps from another famous place in Prague, the Old Town Square. When you get there, wait for the hour to strike and you can watch incredible little figures moving in two small windows in the Prague astronomical clock.

I personally  love the moving skeleton (representing death) on the wall of the tower. The old town clock is medieval, and dates from 1410. I think you will be impressed because everybody is. You will not see this performance anywhere else in the world. Legend has it that after the clock was built, the master clock-maker was blinded so that he couldn’t build a similar clock anywhere else.

In one corner of the square is Celetna Street leading to Republic Square. You can visit plenty of souvenir shops, galleries and the wax museums. At the end of the street you will find Prašná brána, a gateway built as a gothic tower dating from 1483. Behind the gateway are two shopping centres, one with “communist” architecture, one with modern architecture, and many more shops.

There are a few historical buildings as well; Dům u Hybernu (Hybern House) which is a musical theater now, Obecní dům, the Czech National Bank, and at the beginning of the shopping alley, moving in the direction of Václavské náměstí (Wenceslas Square), the biggest square in Prague, there are more shops and The National Museum on the top of the hill. The square is protected by St. Wenceslaus (Svatý Václav) on his horse.

If you reach the museum you will probably be very tired by now. You can find many restaurants or clubs, or go to a hotel and have a peaceful rest. You’ve just seen most of Prague.

But I will give you a few more tips on what to visit on other days. You can go to Žižkov Tower and have an expensive lunch, with incredible views of Prague as seen from no other place. Then go to Jiřího z Poděbrad station, underground line A, and walk for a few minutes. From here, the tower looks similar to a spaceport or spaceship, and many people say it looks like Baikonur, the Russian spaceport, because they started to build the tower at the end of the 80’s when communists were still in charge. But I like it. At least it is tall, huge and modern.

If you would like to see some nature, I would suggest three places for you to visit. Petřín; this park is a little bit hilly, but has a statue in it of Karel Hynek Mácha, patron of all lovers. When you look at his statue you should kiss your partner to keep your love forever. There is a small gallery Magic Cavern ( Magická jeskyně), with amazing fantasy pictures by the painter Reon Argondian. I love it. You can take the cable way to the top of the hill. See the park, the lookout tower, observatory and the biggest stadium in the world. The second biggest is in Rio de Janeiro. Afterwards, you can easily descend to the bottom of the hill.

You can visit Letná Park. This is a park on the opposite side of the Old Town Square with the unusual astronomical clock in it and also with nice view of Prague. There was statue of Stalin (I would say Russian emperor) many years ago and Michael Jackson’s statue of his History tour later in 1996.

If you would like  to see animals, definitely you have to visit Prague Zoo. It is huge and awesome. Take the underground line C to nádraží Holešovice, and then the Zoo bus, number 112. You should visit the zoo for the whole day, or at least the whole afternoon. If you have kids with you, you have no any other choice, just go there and have a spectacular adventure.

I hope you will enjoy your Prague holiday, and that this article will help you to visit as much as you can. Of course there are many other places you could visit. If you don’t want to just visit sightseeing be aware that Prague offers the best beers in the world and the most beautiful girls. Enjoy it.

No spam, notifications only about new products, updates.
PrevPreviousHow to enjoy Ibiza before season
NextPortugal: a cheap camping spot for countless adventuresNext
On Key