Burgers in style of 50’s with a presence of Elvis 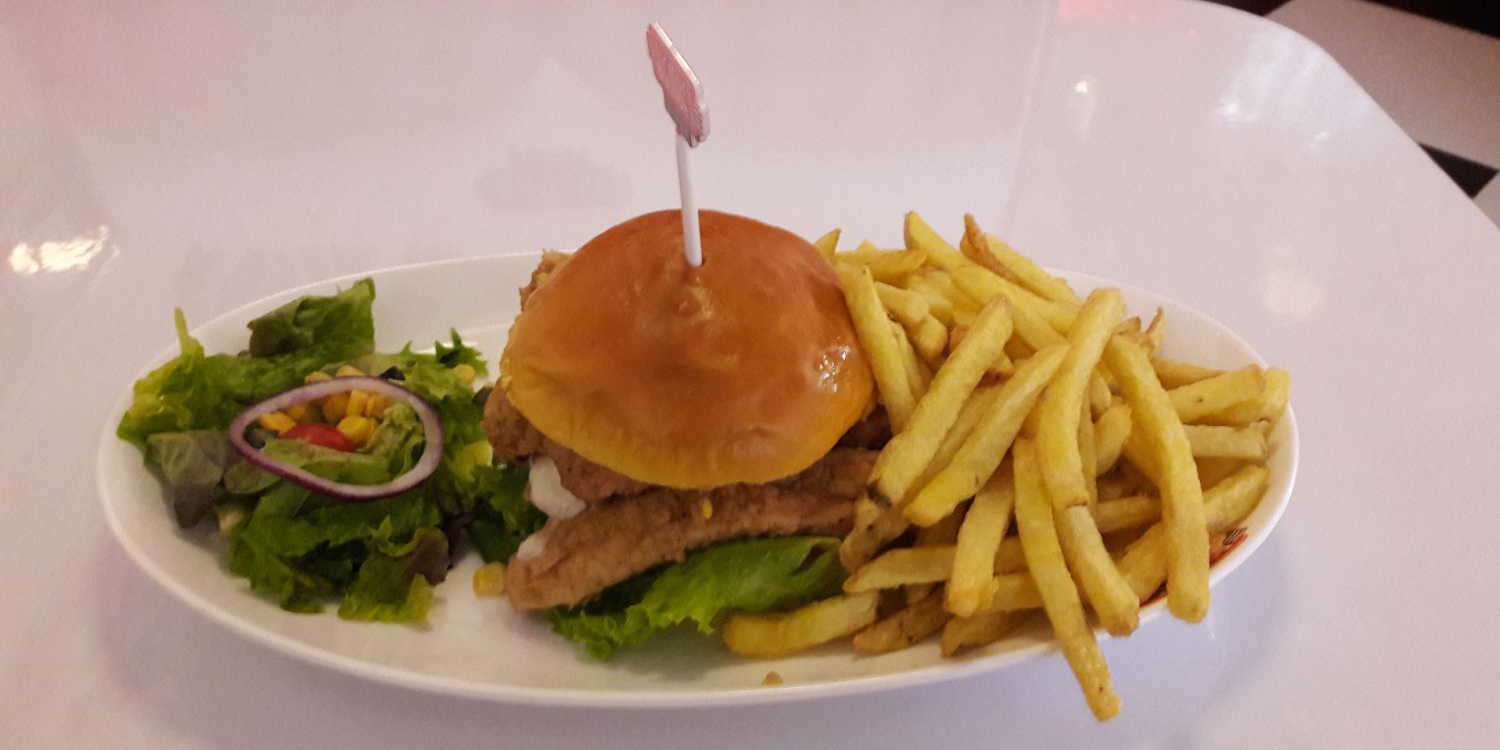 Do you like burgers? – I do. Do you like American style? – I do. Do you like American rock ‘n’ roll? – I do. So, when I saw a newly opened restaurant at Aldgate East which has everything I just mentioned above, I had to visit it. The first thing that impressed me was the great American 50’s design. But I am not a person who wishes to spend too much money on food, and especially burgers, so I checked their prices first. When I saw prices at almost £10 or more for burgers I changed my mind. It was quite a lot! But read on, because things aren’t quite as they seem…..

A few months later, 6 months after they had opened, I decided I really would visit them. It was noon on Sunday, and the restaurant, to my surprise, was absolutely empty. I was a little bit frightened to go in, but I did. I was alone there just with the staff. The manager asked me if I wanted to eat. I said “yes” –  “Take a seat and order whatever you want.” I sat down and studied their menu for a time while looking around me. What impressed me was their old US car remodelled as a table. Fabulous! Everything was clean and tidy. Great US rock ‘n’ roll music, including idols such as Elvis Presley, created an atmosphere which made me feel I really was in the USA in the 50’s. The decoration, front counter, and staff uniforms worked very well together.

Time to order my lunch! I chose a Texan strip burger for £8.85. Because it was my first time there I was a little bit confused with their menu and extras. When I spoke with the waitress she told me fries were included. I welcomed that! It took around 5 to 10 minutes for them to bring me my food. I looked at the plate and how much food I had been given; a nicely organised burger with a chicken strip on a skewer in the middle of the bun with the logo of the restaurant on the edge of the plate, and fries and vegetables on the side. I cut a portion of the burger and tasted it. Ah! I enthused with delight. Just for a moment I thought the chicken strip was a little bit under-cooked. I checked it separately and thoroughly and found there wasn’t anything wrong. – Of course it tasted different because this was not chicken from McDonald’s, and that confused me a little bit. But everything was fine. The mayo with red onion rings and vegetables worked very well together and brought an unforgettable moment of taste. The fries were crispy and not greasy. The vegetables were fresh. My only regret was that I didn’t order any mayo or ketchup for the fries. Unfortunately, when I had finished my food, I noticed I had all the condiments ready on the side of the table so I could use them – Next time! The waitress brought me a small packet and the bill. And this time it was a little bit of an unpleasant surprise. They charged me a “service charge” – 12.50% of the price of the food, which in my case was £1.11. So in total I paid £9.96 instead of the advertised £8.85. But at least I got a lollipop for “free” as a present.

They had one more small surprise, but this is a pleasant one! I noticed it as I was writing this article and checked my receipt. When you keep your receipt you will get 5% discount when you visit them next time.

“Welcome to Big Moe’s Diner” – great burgers, great milk shakes, many flavours of ice-cream, and many other refreshments.

I was curious about their business so I spoke with the manager. Big Moe’s opened their first restaurant in Beckton, London in 2010. I had visited their second restaurant opened at Aldgate East station in February 2016. They are looking for a new location in the UK. – “We would like to open 8 restaurants in the UK within 2 years.”

But including this, Paije Boothe the manager of the company said – “We are going to open a branch in Pakistan in a new shopping mall called the Emporium Mall, which will be ready for business around January 2017. ”

And what did they bring to this 50’s theme? Paije Boothe commented: “Ultimately we believe it is hard to find a truly authentic diner in the UK that tries to capture great food and good times. ”

If you would like to read their story as well as see all that you can expect find in their restaurants, here is their website.  www.bigmoesdiner.co.uk

No spam, notifications only about new products, updates.
NextHow to Cram in as Much as Possible in One Day in LondonNext
On Key